What are U trouble codes?

What is DTC in Toyota?

How do I read a diagnostic trouble code?

How do I read my Toyota diagnostic code?

Technical defects appear sooner or later in cars of all manufacturers, including Japanese ones. The driver is able to decode Toyota error codes on his own, and it is possible to determine the malfunction of the systems without the use of scanners. If a car enthusiast has never encountered such a problem before, then this article will help to understand all the nuances and perform work at a professional level.

Diagnostics is available on vehicles of the entire Toyota model range and is divided into two types:

Before starting electronic diagnostics, the driver must make sure that all systems and basic mechanisms of the Toyota vehicle are in working order. To do this, you should check the fuses, wiring, and also examine the connections and vehicle components for breakages.

If any serious problem is found, then it must be eliminated, and only then carry out computer diagnostics, which happens:

How do you read diagnostic trouble codes?

What is a vehicle diagnostic trouble code?

How many diagnostic trouble codes are there?

What does a diagnostic trouble code DTC indicate?

For self-diagnostics, the driver needs to work with DLC 1 and DLC 2. This abbreviation stands for Data Link Connector. DLC 1 looks like a plastic box with a lid on top. Located under the hood, most often on the left. It is easy to find by the Diagnostic label.

In older models, the diagnostic connector is made in the form of a yellow circle and is located near the battery. There are no DLC2 details in cars like the Corolla AE 100.

In the new models, DLC 2 is located directly in the cabin, under the dashboard and at the feet near the steering wheel. Most often it is round and is used during the inspection carried out with the help of special equipment.

During self-diagnosis by closing individual contacts of the connector, only by connecting them in the desired sequence, you can get the correct code for decryption.

To find out about the presence of faults in the engine and / or gearbox system, the following steps will help:

Everything is in order with the car and no breakdowns with the internal combustion engine and transmission were found if:

Any other combinations of light bulbs indicate malfunctions in the operation of engine systems, gearboxes or other mechanisms in the car.

If the circuit on the back of the cover is erased, you cannot find the contact or are not sure that you have closed the right one, you must:

It will be more convenient if someone helps to follow the light bulb while you change the position of the wire.

The first setting option will allow you to find out the errors indicated by a two-digit code (type 09):

Such code should be "read" according to the following rules:

Breakdowns in the ABS system are determined according to the same scheme, but the terminals TC and E1 are closed. DTCs SRS and 4WS are calculated by the corresponding sensor with the same closed contacts as in ABS. 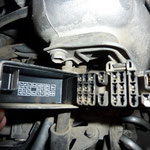 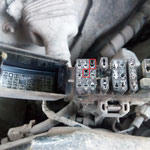 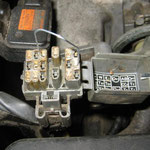 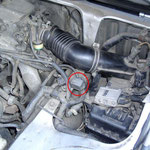 Type 9 error codes common to all Toyota vehicles are represented by two-digit codes.

12 No signal from the engine speed sensor

21 Incorrect signal from the oxygen sensor, if the engine is V-shaped, then the heater of the left main oxygen sensor is faulty

28 Incorrect signal from the oxygen sensor (for V-shaped engines, the heater of the right main oxygen sensor)

31 Incorrect signal from the air flow sensor or, if not, from the pressure sensor in the intake manifold (vacuum sensor)

43 No starter signal (STA) to the engine control unit

51 No idle signal from TPS

52 Wrong signal from the knock sensor (if there are two of them, then from the left or from the front)

55 Wrong signal from the knock sensor (if there are two of them, then from the right or from the rear)

61 The main speed sensor or its circuit is faulty

77 Defective pressure control solenoid or its circuit (in the machine)

81 Faulty circuit between TCM and ECT1

82 Defective circuit between TCM and ESA1

84 Defective circuit between TCM and ESA2

85 Faulty circuit between TCM and ESA3

The general list of unambiguous codes (type-10) for a Toyota car consists of the following items.

2 The air flow sensor is giving a signal incorrectly

3 Incorrect signal from the communicator

4 The coolant temperature is out of range, the sensor is out of order

5 Incorrect communication with the oxygen sensor

6 The breakdown lies in the engine speed

7 Throttle valve in the wrong position

If the car has an on-board computer or a robot, then the code will appear on the mileage screen. It will consist of a Latin letter at the beginning, for example P, B, C, and 4 digits. This is typical for such cars as Toyota Rav 4 Avensis, Corolla, Mark II or Land Cruiser 200, Toyota Prado 120 and others that run on gasoline.

When writing down codes for diesel cars, you can see the following designations.

13 Speed out of permissible limits

19 Incorrect position of the accelerator pedal

35 Charge pressure out of range

42 The fault lies in the vehicle speed sensor

96 Position of the EGR valve is incorrect

Breakdown of other parts of the diesel engine.

14 Breakage in the valve that regulates the injection timing

15 Throttle servo is out of order

18 Breakage in the solenoid bypass valve

Cars of the same brand differ not only in the engine, but also in the gearbox. For the same Toyota Corolla 150, Celsior or Vista, automatic transmission breakdowns will differ from the “mechanics” malfunctions.

If the transmission is malfunctioning, you will see one of the codes.

Such errors are typical for different models, including Toyota Ipsum, Toyota Highlander 2001 and Caldina.

For diagnostics, special equipment and devices are also used. Such devices will display five-digit codes. They can also be recognized using the on-board computer, which is installed in new cars and hybrid models.

Code on the screen Toyota with on-board computer

The hybrid version includes Toyota Estima, Toyota Prius, third generation Toyota Harrier and others. These models (in addition to other breakdowns) may experience malfunctions of the high-voltage battery system (HVB). The hybrid installation error codes and their meanings are shown in the table.

B0101 The security system does not work correctly, problems with the protective cushions

In 1801, the chains of the squib are cut off from the driver's side

C1201 The engine is not working correctly, the speed is below the permissible

P0420 Catalyst system B1 is operating below the permissible efficiency threshold

After the repair was made and the breakdown was eliminated, the error codes may not disappear by themselves. To reset them, there is also a certain sequence of actions. To do this, we again need a diagnostic connector.

To reset the codes, you must:

Switch on the ignition.

On the DLC1 connector, close the TC and E1 terminals with a piece of wire or wires.

In 3 seconds, press the brake as many times as possible, but not less than 8 times.

Make sure the light blinks evenly at half-second intervals.

Switch off the ignition and remove the jumper from the contacts.

Make sure the ABS indicator is off.

Comments: 0
Toyota air conditioner does not work
Toyota automatic transmission problems
Reasons why the car will not start
Causes and signs that the catalyst is clogged
Frequently Asked Questions Highlander
High fuel consumption of Toyota car

Please be aware that not all of the functions described in this manual may be supplied with your vehicle. In the repair manual, there may be discrepancies with the description of your specific car, and you can also find a description of such versions and equipment that are not available on your car.

Please note that all repair manuals are found on the Internet in the public domain. Here we have collected everything we could find, so manuals in different languages such as Chinese, German, Russian, etc. may be present.